June 18, 2012 – Kodansha Comics’ newest manga series Attack on Titan Vol. 1 debuts in US stores tomorrow. The manga written and illustrated by Hajime Isayama has sold over 7 million copies in Japan and is a top 20 best seller on the weekly charts. 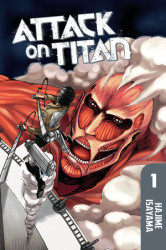 Attack on Titan (Shingeki no Kyojin) centers on the remnants of the human population who live in cities surrounded by colossal walls due to the appearance of gigantic humanoid creatures, the Titans, who exist only to consume humans as food. Though the walls keep people safe, humanity has become cut off from the outside world. Eren Jaeger, an idealistic and impulsive young man, is determined to destroy the Titans and has the ability to summon one of the gigantic Titan bodies and seemingly control it at will.

The graphically stunning series has garnered many accolades: It won the 2011 Kodansha Manga Award for best Shonen title and was nominated for the 16th Osamu Tezuka Cultural Prize in 2012. The 2012 edition of the Kono Manga ga Sugoi! Guidebook assembled by industry professionals lists it as a top ten manga.

A live action film adaptation of the manga is in the works for release in Japan.

Attack on Titan Vol. 1 will be available wherever manga is sold on June 19th.

Established in New York in 2008, Kodansha USA Publishing (KUP) is a subsidiary of Kodansha, Japan’s largest publisher. KUP’s first works under the Kodansha Comics imprint were Katsuhiro Otomo’s Akira and Masamune Shirow’s The Ghost in the Shell. KUP has expanded their catalog to include such titles as Fairy Tail by Hiro Mashima, Shugo Chara by PEACH-PIT, and Sailor Moon by Naoko Takeuchi, the highest selling manga in the U.S. in 2012. Kodansha Comics is distributed by Random House Publisher Services.