Nakaba Suzuki is no novice mangaka (manga artist), having made his debut in 1994, but he keeps his story and characters fresh in his latest—the kinetic medieval-fantasy actioner The Seven Deadly Sins. His worldview has grown too—it's now evolved into a full-blown animated series, soon to be unveiled to Western audiences for the first time on Netflix on November 1. Before you settle down to watch the anime though, here's seven questions about The Seven Deadly Sins posed to their original creator.

Born in Fukushima, Japan on Feburary 8, 1977, Nakaba Suzuki debuted as a mangaka in 1994 in Weekly Shonen Jump Special ‘95 Spring Special (published by Shueisha). In 2012, he began serializing The Seven Deadly Sins in Weekly Shonen Magazine (Kodansha). Interesting fact: he's one of the few manga artists who have serialized manga in all four major weekly manga magazines in Japan.

Kodansha Comics: What was your favorite story or manga growing up?

Nakaba Suzuki (NS): The first manga I ever bought was Dr. Slump by Akira Toriyama. When I was in elementary school and junior high, I was really into Ultimate Muscle, Fist of the North Star, and Dragon Ball. I love drawing muscles now because of those three manga.

KC: Is it true The Seven Deadly Sins is your own take on the story of King Arthur?

NS: It's true, I borrowed the names of characters that appeared in the King Arthur tales, but each of their personalities and the story itself is my original work.

KC: Who are the Seven Deadly Sins to you?

NS: They're an awesome group of people determined to carry out their own sense of justice, even if others call them villains. 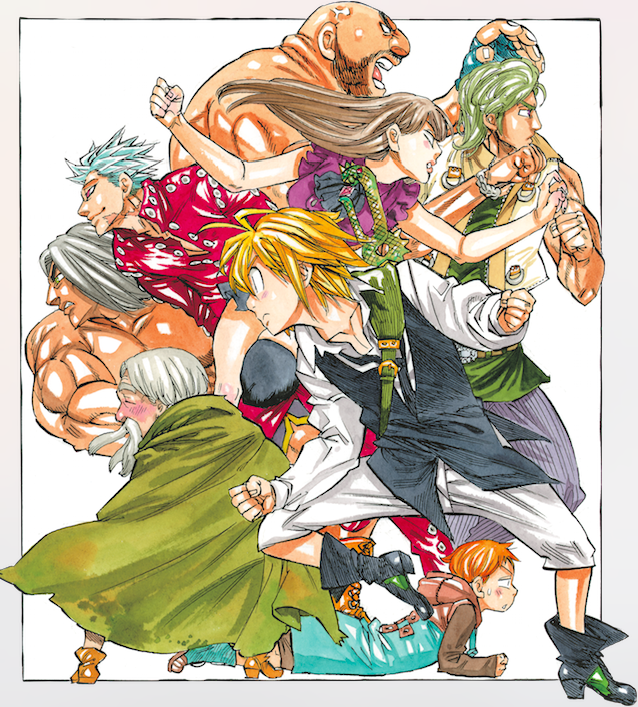 KC: There are so many strong characters in this series. What are you thinking about when you make them?

NS: I definitely try to make characters who are fun to draw. Otherwise, it’d be totally dreadful for me.

KC: There hasn't been much revealed yet about some members of the Seven Deadly Sins. Why is that?

NS: Maybe it’s because they're too strong? Maybe you’ll find out soon enough.

KC: How do you feel about your manga getting turned into an anime?

NS: When I first saw the anime of The Seven Deadly Sins, I really felt I'd been able to make a series people could enjoy regardless of age. It’s so fun to watch the colorful, vibrant characters in the show.

KC: Any comments to Seven Deadly Sins fans in America?

NS: My motto is, “no chapter that sucks.” I'll make sure The Seven Deadly Sins continues be exciting as long as it goes. I hope you enjoy it!

For more coverage of The Seven Deadly Sins manga, including a video of Nakaba Suzuki drawing the latest chapter, go here: