Post-Valentine’s Day! Love Is a Battlefield Sale!
Congratulations, you’ve survived Valentine’s Day, again. But let’s be real: romance doesn’t begin or end on February 14, in real life—or in manga! In fact the so-called most romantic day of the year might just be the prelude to one wild emotional rollercoaster ride. And as well-read fans of Kodansha Comics’s extensive romance-manga lineup know, love can be as tough as or tougher than any battle in shonen manga.

So, to get you through to next year’s Valentine’s Day, at least as far as manga is concerned, this week we’ve selected a massive 60+ romance manga series with a twist, and put them at 50% off at all of our digital retail partners: BookWalker, comiXology, Google Play, iBooks, Kindle, Kobo, and nook. (Sale ends February 25.)

FUNNY!
Aho-Girl
Boarding School Juliet
The Full-Time Wife Escapist
Hotaru’s Way
I’m in Love and It’s the End of the World
I Want to Hold Aono-kun So Badly I Could Die
Kiss Him, Not Me
Lovesick Ellie
Magical Sempai
My Wife Is Wagatsuma-san
Princess Jellyfish
The Prince’s Romance Gambit
Tokyo Tarareba Girls
Tsuredure Children
Wotakoi: Love is Hard for Otaku
Yamada-kun and the Seven Witches

CUTE!
Aoba-kun’s Confessions
Beauty Bunny
Can I Kiss You Every Day?
Kigurumi Guardians
A Kiss, For Real
Kamikamikaeshi
Love and Lies
Love’s Reach
Our Precious Conversations
My Boy in Blue
My Boyfriend in Orange
Waiting for Spring
That Wolf-Boy in Mine!
You Got Me, Sempai

TROUBLESOME (BUT HANDSOME)!
Beware the Kamiki Brothers
Defying Kurosaki-kun
Kiss Me at the Stroke of Midnight
LDK
Living Room Matsunaga-san
Mikami-sensei’s Way of Love
My Little Monster
Peach Girl
Peach Girl Next
The Prince’s Black Poison
Say I Love You.
A Springtime with Ninjas
The Walls Between Us
Liar x Liar

Happily ever after … ? Hope ya found the kind of love you were looking for! Just in time for Halloween, we've made some updates on the Yamada-kun and the Seven Witches Manga App for iOS. In addition to adding Volumes 3 and 4, you can also now read the complete interview with artist Miki Yoshikawa!

Miki Yoshikawa has exceptional talent. Not only because she’s one of the few female mangaka (manga artists) who’ve succeeded in shonen (boys’) manga, but because her approach to manga is so genuine. If you ever get lucky enough to meet her, you’ll quickly realize that what makes her a such a unique person is also what makes the characters in her manga so much like real people.

During her visit to Anime Expo 2015, she shared her thoughts and experiences as the author of Yamada-kun and the Seven Witches. Relive some of the excitement around her Stateside visit in this interview and the accompanying photos from her events!

Miki Yoshikawa made her pro manga debut in 2003 with Glory Days, a one-shot in Kodansha’s Magazine Special. After a stint as an assistant for Hiro Mashima (Fairy Tail), she published another one-shot, Yankee-kun to Megane-chan, in Shonen Magazine Wonder in 2005. Thanks to its deft comedic touch, Yankee-kun went on to become a short series and later Yoshikawa’s first long-running series in Weekly Shonen Magazine. It was adapted into a live-action drama in 2010-11. Yoshikawa’s best known work, Yamada-kun and the Seven Witches, started serialization in 2012 and has since sold more than 3 million copies. It’s been adapted into a live-action drama, in 2013, and a TV anime, in 2015. 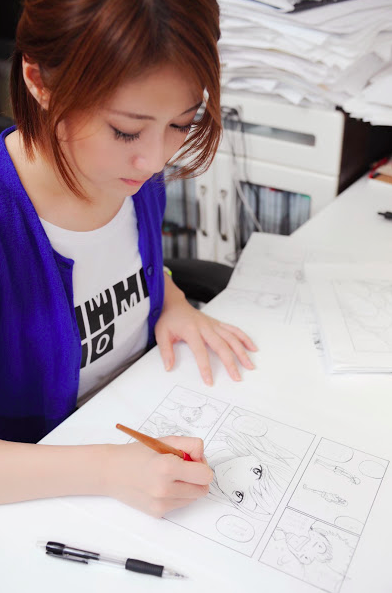 Q. How did you become a mangaka?

Miki Yoshikawa (Y): When I was nineteen, I just drew a manga and sent it in to a contest. I sort of studied other manga and picked up how to draw. Then one day, my current editor called me and asked, “Do you want to become a mangaka?” Out of pure excitement, I said, “YES!” [laughs] That was the beginning of everything.

Q. What was the editor’s advice at the time?

Y: I remember telling my editor this was actually the first time I’d ever drawn manga, so it might be a little rough. He totally agreed with me. [laughs] I appreciated his honesty, though. I know he wouldn’t give me false praise if the manga wasn’t actually interesting. That’s what make it so easy to work with him. We’ve been working together ever since—leading up to my debut and also on my current series. 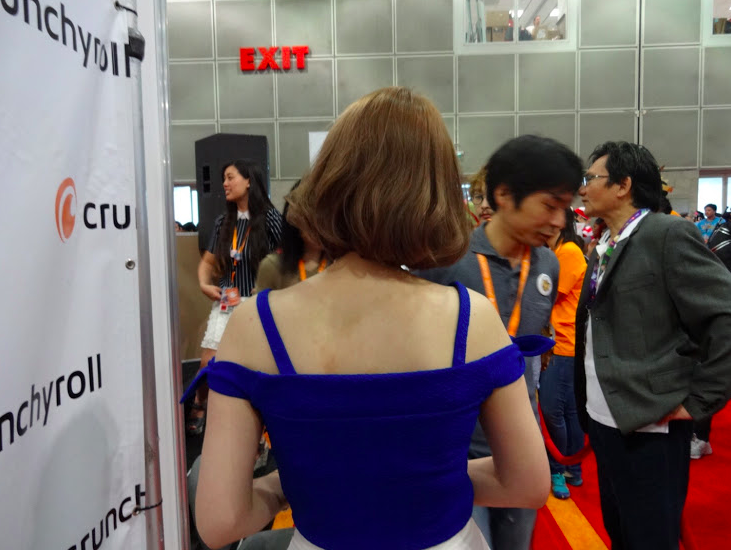 Yoshikawa with her editor

Q. You’ve also worked as an assistant for Hiro Mashima (the creator of Fairy Tail).

Y: After my editor contacted me, I really thought I could be a mangaka. But I also knew that I had to get better. At that time, Mashima-sensei was looking for an assistant, and I knew I wanted to work with him. Hit Manga and Anime on Crunchyroll Gets iOS App with Manga, Messages & Animated Autograph from the Author

San Francisco, Calif. (July 2, 2015)—Kodansha Comics just released a special Yamada-kun and the Seven Witches iOS app, with graphic-novel volumes of the manga, special messages from author-artist Miki Yoshikawa, and her animated virtual autograph, to celebrate her rare Stateside appearance at Anime Expo on July 3 and 4.

The link to download the app is at kodanshacomics.com/yamada.

“The app provides a direct connection from the artist to her work and to her fans,” said Alvin Lu, Kodansha Advanced Media’s General Manager. “Updates will include continuing new graphic-novel releases, interviews with Miki Yoshikawa, con coverage, news, and special messages from the author to her English-language fans.”

An in-app manga purchase unlocks Yoshikawa’s animated Virtual Autograph, which was built with Madefire’s Motion Books technology. Those at Anime Expo who bring their Virtual Autograph to the Kodansha Comics booth (booth #324) will receive an AX 2015 Exclusive Shikishi (signing board), which they can then have Yoshikawa sign at one of her Anime Expo autograph sessions.

Miki Yoshikawa will be attending Anime Expo as a Guest of Honor. Her visit is being sponsored by leading anime-streaming site Crunchyroll, with events scheduled for Friday July 3 and Saturday July 4.

*INSTRUCTIONS ON GETTING YOUR TICKET TO THE MIKI YOSHIKAWA AUTOGRAPH SIGNING – You must have a ticket to attend!

Tickets can be picked up at the Concourse Foyer starting at 8 a.m. on Saturday and will be distributed on a first-come, first-served basis. Early arrival is highly suggested. The start of the line will be outside of the building, and attendees will be led into the hall just before 8 a.m.